A DANDELION IN WINTER

I am discontent in winter. It’s the death; everything is dead. Dormant, yes, I know, but it’s death to me, and my psyche struggles here in the bowels of February. When this happens it will reach of its own accord to memories of sun and earth and life.

Sister Leona was Hawaiian. She was small, with a flat brown face and round, kind eyes. She was my second grade teacher at the Immaculate Conception Grade School, and other than my ongoing debate over which of the Bodie twins I had the bigger crush on, was my only fond memory.

She was different than all the other nuns there, steal-toed, white-knuckled, bitter women, bent on a wayward course of love through discipline and sacrifice. I survived five years of uniforms, clip ties, ridged single-file lines that followed black habits to silent afternoons of forced reverence, bloodied hands (yes, they did that then), and a catechism that was lost on me from the start.

Sister Leona had a quiet sweetness about her, and she played the Ukulele for us, a large Baritone one that made her look even smaller. She did not fit in there.

It was June. We counted the days to summer and freedom, and we burned for the outdoors. On one spectacular day, we sat at our desks with our proper posture and folded hands, looking jealously out the windows at the recess yard behind the school as she entered the classroom. She took her customary place by her desk, but instead of speaking she just stared at us. She stood quietly regarding her class until the last head turned from the windows to see why she had not begun. Then she said, “Line up class, and follow me.” Then she picked up her Ukulele and went to the door.

We followed her into the hallway and out the front doors of the school, a path unheard of unless there was a fire drill, which there was not. Sister Leona’s second grade class followed her down the walk, across the parking lot and onto the lawn of the convent, then behind it. The sun and the scent of spring soon washed away our whispered questions, and we followed the tiny shrouded figure into the woods.

We emerged from the trees, still in single-file, and stood at the edge of a secluded glade no more than a few acres long and completely surrounded by trees. It sloped gently to the south like an ocean swell. What we saw there, I have never seen since. We stood like pilgrims at the Elysian Fields gaping at an awe-inspiring field of Dandelion.

They stood nearly as tall as we, and blanketed the field in an unbroken, sun-drenched, dazzling yellow tide. You could burry a yardstick in them. I have never seen them so tall. They were packed like wheat the length and breadth of the entire field. We were second graders and about four feet tall, and we could stretch our arms out straight from our shoulders and tickle our palms with the soft yellow canopy.

The silent questions were now voiced, “Sister Leona, what is this, why are we here, what are we supposed to do now?” She smiled and nodded toward the field, “Let’s go!” and waded in with her Ukulele.

The field was pristine, it was easy to tell that no one had been there before or had walked among those flowers, or if anyone even knew they were there. I have thought since about how she didn’t seem to fit in with the other sisters or enjoy the stiff protocols of the school, and how she must have wandered the convent grounds in meditation over questions I will never know. She must have come upon that glade in her wanderings. Whatever she saw there, she must have been thinking of us, because she left it untouched.

The line broke, and with screeches of delight we plowed into the flowers. Some walked alone picking armfuls of dandelions and flung them in the air, others jumped and rolled and tunneled, then huddled together to make nests. We lied in them looking up at the perfect sky, thumbs against the sun, talking and laughing, and guessing at cloud shapes. Sister Leona gathered us after a while and sang songs from Hawaii, only now we learned them and sang with her.

She taught us how to make leis with the dandelions we’d harvested for her. The way we knew each other as classmates ended and we became children again, and friends for the first time. The popular girls championed the lei-making, and helped the boys, who forgot all about their feigned irreverence. They made sure that every shy girl and fat boy wove as well as the rest, there were no loners that day. 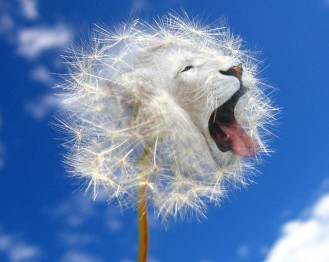 She talked about her home, and the ocean, and we wondered together how the field would look when the dandelions went to seed—a million new wishes waiting to be blown on the wind. We were her dandelions.

Leona is a Hawaiian name, it means “lioness.” This one broke every rule we had learned, and taught us the proper way to value what really mattered. This, it seemed, was her plan.

Whatever questions lead her to that field; I believe that we were among them. I also believe that I had the privilege that day to play in Leona’s miracle.

She did not stay long at the convent. Some years later I heard that she returned to her home in Hawaii, and there the sea took her back.

I never shook the image of a Ukulele floating on the water.

I’ve had many teachers, and I did not know this until I was older, but there have been none so important and formative as that of little Sister Leona.

If what she meant to do for us was to grant one golden day, one pure, bright spot in the seat of the soul…